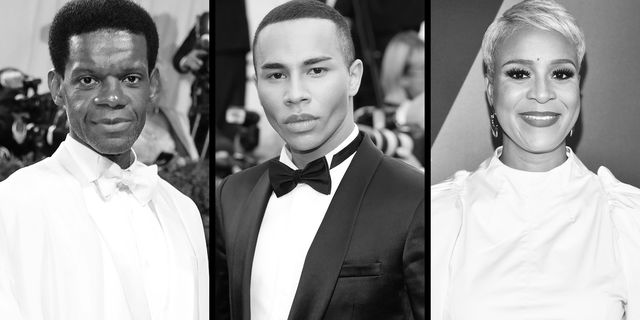 Less than two weeks ahead of the second anniversary of George Floyd’s death, which spawned a global reckoning over racism and policy brutality, and on a smaller but nonetheless visible scale, a lack of diversity within the fashion industry, an impressive range of talent, including Balmain creative director Olivier Rousteing, gathered at Parsons School of Design to check in about the calls for change that were made by brands, and much more.

The panel, titled “Fashion’s Diversity: Where It Stands, Where It Stalls, Where It’s Going,” was moderated by WWD executive editor Tara Donaldson and also featured Brandice Daniel, CEO and founder of Harlem’s Fashion Row and Icon 360, and Victor Glemaud, creative director and founder of In the Blk. It started with a pulse check:

Glemaud answered first: “All of the above.”

It was clear that the Black community has mixed emotions as we look back on the past two years. As Daniel noted, Black women have been largely scrubbed from history for centuries. She cited Ann Lowe, the couturier who made Jackie Kennedy’s wedding dress and went largely unrecognized for her work after she wasn’t given attribution from the former First Lady. “We have to continue to share stories of incredible Black people in fashion,” she said to the predominantly Black audience, who nodded in agreement, shouting affirmations like “yes” and “period!”

The panelists pointed out that progress has been made. “We are all here together today to fight and make sure the world is going to be better,” added Rousteing, before indulging listeners in his own story about growing up as the adopted baby of a French couple in Bordeaux and “being the only Black person at fashion shows” before helming one of the biggest fashion houses. “I’ve been fighting every day in my career,” he said, adding, “the French love to not talk about anything.” Rousteing’s upbringing is the subject of a Netflix documentary, Wonder Boy; in reference to the film, he later said, “Behind all of this glamour is a human being that went through what he went through.”

All the panelists agreed about the necessity of putting pressure on brands to renew the commitments they made in June 2020, when many posted black squares to their Instagram feeds. Aurora James’s Fifteen Percent Pledge and consulting agencies like 2BG (2 Black Girls), founded by former fashion editors Danielle Prescod and Chrissy Rutherford, continue to hold companies accountable for their representation goals. Daniel stressed the importance of making commitments quantitative, as James did by asking businesses to donate 15 percent of their shelf space to Black-owned brands, in order to invest in the future. Glemaud underscored the need to create more employment opportunities for people of color.

So, in the wake of a racial reckoning, where are we?

“[George Floyd] allowed us to examine and be honest about what has historically happened to Black people, not just in fashion, but in history, and to check in on people,” Glemaud said. Added Rousteing: “We need to make sure the world of tomorrow won’t be a repetition of the world of yesterday.”

Let’s make sure of it.