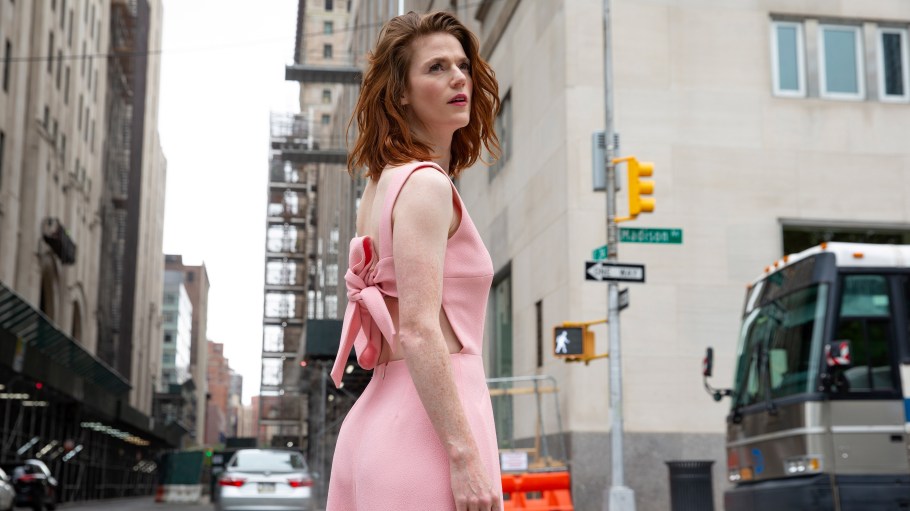 Rose Leslie has a lot more appreciation for the commitment ginger hair-craving women make to achieve red locks. Naturally a redhead herself, Leslie has never had to dye her hair and in fact was beginning to tire of being sought out for exclusively redheaded parts. But for her latest role, as Clare in HBO’s latest adaptation of “The Time Traveler’s Wife,” her hair was deemed not red enough for the character so there she was, sitting in the hairdresser’s chair for hours on end.

“Having never sat down in the hair salon in the chair to have my hair dyed before, I was oblivious to the amount of hours that it then takes to keep the color in, and the commitment in the chair, and the work that goes into it from everybody applying this color and mixing,” Leslie says.

She was instructed to take freezing cold showers to prevent the color from fading, which she stuck to diligently — the less time in the hair chair, the more time with her 15-month-old son.

“I did the cold showers and I rather love them now,” she says. “It gives that wonderful tingling sensation. It’s unpleasant, but then you push through and then you’re a bit, ‘oh s–t, weirdly I’ve achieved something.’”

Leslie is best known for playing Ygritte on “Game of Thrones,” which is also how she met her now-husband, Kit Harrington. Since leaving the show the Scottish actress has been in projects like “The Good Fight” and “Death on the Nile,” and now she takes center stage as the lead in “The Time Traveler’s Wife,” which has gone from book to film to TV series. Leslie plays Clare alongside Theo James as Henry.

The original “Time Traveler’s Wife” phenomenon passed Leslie by, though she recalls friends at university raving about the book. When she learned she would be playing Clare, she of course reached for the book but resisted watching the 2009 film.

“I felt that had I seen the film on top of reading the book on top of learning my lines, that possibly was too many variations of my character and I didn’t want to muddle myself,” she says.

The chance to join a decades-sweeping epic love story, written by Steven Moffat of “Doctor Who,” gave her no pause.

“What really grabbed me was that their love transcends, that actually when he is gone, she will wait for him, and in the book when he dies, she waits for him to come to her late in age knowing, because she’s read a letter from him, that he comes back and visits her. And that just felt like such a different romance, a different tale of love with the combination of the sci-fi element obviously. It felt profound and anchored and I was, ‘OK, well, there we go.’”

Her and Harrington’s son was just 10 weeks old when she found out they’d be coming to the U.S. to shoot the project.

“Going into the auditions, I was eight months pregnant and so I was like, ‘Well, this would be magical if I get it. This would be a win-win. What a challenge and something that I hoped and felt like I could rise to.’ But then if I hadn’t got it, I suddenly gained weird bonus time with my son again. It was a weird thing for me,” she says. “So when we were out here, I was like, ‘I can’t believe I put myself in the firing line to go back to work so soon.’ It was a strange balance for me in embracing work and having hours to be on this project, but also recognizing that it was a wrench being pulled away from my boy, who’s so young. And there were several days, obviously, when I didn’t see him because by my pickup and by my drop-off, he’d already had his day, so I’d just go in and just smell him when he was fast asleep. So it was strange. It was a lovely thing to be out here, to be working, and I was very happy to have had the opportunity to do that, but it was bittersweet because I also felt at the same time I was losing out on seeing my son develop.”

Being part of a project like “Game of Thrones” obviously opened many doors for Leslie and it also brought her several fantasy scripts, as well as scripts for redheads — something she’s looking to deviate from after all this time.

“I’ve always found that I have obviously gone out for redheaded characters, but suddenly there was an onslaught of, ‘You can’t play any other character unless she’s ginger.’ And I’m like, ‘Oh come on. We can branch out a bit,’” she says lightly. “But obviously, how marvelous is that?”